One hundred and twenty-one years ago on this date, New Orleans Police Chief David Hennessy was shot and mortally wounded a short distance from his home. He succumbed to his wounds the following morning.

Hennessy (left) attended a meeting of the Police Commission during the evening of October 15. The meeting broke up at about nine o'clock. Hennessy was driven back to police headquarters at the southwest corner of Common (Tulane Avenue) and Basin Streets. Captain William O'Connor of the private Boylan Protection Agency met him there and was to escort the police chief home. Hennessy had received a number of death threats from the local Mafia and the city fathers hired the Boylan agency to keep him safe.

Though Hennessy had a reputation for punctuality (he lived with his widowed mother and reportedly tried not to give her reason for worry), the chief did not immediately head home. Instead, he and O'Connor chatted at police headquarters for more than an hour. They left the building a few minutes after eleven.

While Basin Street was the most direct route between Hennessy's office and his home on Girod Street, heavy rains of earlier in the day had made the road unpassable. Hennessy and O'Connor took a significantly lengthier route, riverward on Common Street and then up Rampart Street to the intersection with Poydras Street. At that corner, the two men stopped into Dominick Virget's Oyster Saloon for a late snack. A teetotaller, Hennessy had a glass of milk with his plate of oysters.

At eleven-thirty, the men stepped out of Virget's and continued up Rampart Street. They paused in front of the McDonough schoolhouse at the corner of Rampart and Girod, about one and half city squares from Hennessy's home. O'Connor said goodbye to Hennessy at that point, though he had been charged with seeing the chief all the way home. O'Connor crossed the intersection diagonally to his left - his intended destination is unknown - while Hennessy turned right on Girod.

The chief took only a few strides and then halted as a young man darted out of a Girod Street doorway and ran toward Basin Street whistling loudly. The youth turned right onto Basin and disappeared around the side of Mrs. Ehrwald's second-hand store.

Hennessy managed just a few steps more. As he reached the front of the residence at No. 269 Girod Street, shotgun pellets tore into him from his left. The initial blast, originating from the darkness under a shed roof on the opposite site of Girod (right), shredded his umbrella, disabled his left hand and knocked him backward. Hennessy instinctively drew his ivory-handled Colt 45 revolver. Another blast of shotgun pellets ripped through his slacks and shattered his right knee. On his way to the ground, the chief was struck by pellets in the chest and abdomen and then in the face and neck. Hennessy fired his revolver into the darkness across the street as he struggled to stand up.

Two shadowy figures stepped into Girod Street. Illuminated by a streetlamp, they advanced toward the fallen police chief. They fired large-caliber slugs into Hennessy's midsection and then ran off.

Hennessy miraculously managed to rise to his feet. He stumbled a few yards to the corner of Basin Street and dragged his disabled leg a few more paces down Basin. He collapsed onto the front steps of No. 189 Basin Street. Captain O'Connor, at most only a single square away when the gunfire erupted, reached the chief's side far too late to fulfill his function as bodyguard.

"They gave it to me," Hennessy mumbled, "and I gave it back the best I could." O'Connor asked if the chief could identify his attackers. Hennessy said, "Dagoes."

148 years ago: Macheca and the black market

One hundred and forty eight years ago on this date, young Joseph P. Macheca of New Orleans was tried and convicted before a Union military court of selling stolen army rations.

Macheca, by then a veteran of Confederate service in Louisiana, was found selling U.S. Army-labeled barrels of pork and beef through his stepfather's produce store. He and some conspirators were tried before a military tribunal on Aug. 28, 1863. While Macheca's conspirators - members of the Union occupying force in New Orleans - were sentenced to prison time, Macheca was subjected only to a $50 fine.

Soon after, Macheca left New Orleans for Texas, where he gathered a small fortune as a smuggler.

Excerpt from Deep Water: Joseph P. Macheca and the Birth of the American Mafia

"J.P. Macheca's relatives and friends passed through his Bourbon Street home in a steady stream Sunday. Curious onlookers, denied entry into the home, lined the banquette and spilled out into the roadway. The Daily Picayune noted that Bourbon Street 'was well nigh blockaded throughout the day.'
"J.P.'s body, dressed in a fine, black suit, was laid out in the black draped front parlor of the home he had shared with five of his seven children. His open, metallic casket, ornamented with gold and silver and lined with white satin, stood in the center of the room. A tall crucifix was positioned at the head of the coffin. A silver candelabra stood directly behind that, softly lighting the room and casting several faint cross-shaped shadows on J.P.'s remains.
"A large crowd squeezed into the house when the Very Reverend Hyacinthe C. Mignot, administrator of St. Louis Cathedral, arrived with Father Berronet to bless the deceased.
"In late afternoon, six pall bearers—Macheca Brothers employee Dan Fleming, stevedore Henry Peters, railroad fruit agent John Louis Grashoff, attorney Anthony Sambola, Special Officer Alphonse B. Donohue and Custom House Examiner John Thatcher—moved toward the center of the room. The lid of the coffin was lowered and fastened in place. It, too, was accented with gold and silver. An engraved gold plate on the lid held a single word: 'Rest.'
"J.P.'s children stepped forward to say goodbye to their father. Each fell into a sobbing hug with the metal casket. Family friends helped them to regain their composures.
"As the bells of St. Louis Cathedral tolled, J.P.'s funeral cortege moved along Hospital Street and then up Chartres Street. A great many carriages followed the hearse.
"Newspapers noted that none of J.P.'s numerous clubs and organizations attended as a group. Crescent City Democratic clubs, Pelican Hook and Ladder No. 4, the Red Lights Club and other local institutions apparently feared being linked with J.P. in the public perception. Their collective trepidation did not keep individual members from attending the funeral in large numbers.
"The procession halted for a time within the great cathedral as organist Gabriel Tusson played a funeral hymn and Father Mignot chanted prayers and offered words of hope for the family. Near dusk, the cortege moved on to St. Louis Cemetery, where J.P.'s remains were interred beside those of his wife." 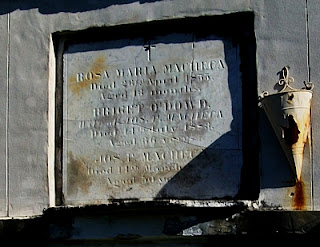 Interestingly, the location of J.P. Macheca's burial site had been forgotten for some time. It had been misrecorded as lying in St. Louis Cemetery No. 1. Our good friend Andrew Dodenhoff recently discovered the gravesite in St. Louis Cemetery No. 2. The name "Jos. P. Macheca" is barely visible at the bottom of the stone in this photograph. The name directly above it, "Briget O'Dowd" was Macheca's wife, who died after a long illness in 1883. The name at the top of the stone appears to be that of Macheca's half-sister who died as a baby. Rosa Maria's death occurred during one of the worst periods of Yellow Fever in New Orleans history, but it occurred in April, which would have been too early in the year for the mosquito-borne disease to strike.
Posted by Thomas Hunt at 7:07 AM
Labels: gravesite, macheca, st. louis cemetery

On March 14, 1891, under the cover of a large, angry mob, teams of assassins hand picked by William Parkerson and other New Orleans political leaders, broke into Orleans Parish Prison and murdered eleven men held prisoner there.

Deep Water is the historical biography of Joseph P. Macheca. In 19th Century New Orleans, Macheca was a pioneer of commerce, a Confederate privateer and, according to legend, the godfather of the first Mafia organization to germinate in American soil.

Link below to the sale page of each listed merchant. (Hardcover was available for first edition only.)

Writer, editor, researcher, web publisher, specializing in organized crime history. (I am available to assist with your historical/genealogical research, as well as your writing and editing chores. Email me at tphunt@gmail.com.)
I am editor/publisher of crime history journal, Informer; publisher of American Mafia history website Mafiahistory.us; moderator of Mafia-related online forums; author of Wrongly Executed?; coauthor of Deep Water: Joseph P. Macheca and the Birth of the American Mafia and DiCarlo: Buffalo's First Family of Crime; contributor of American Mafia history to Australian-published Mafia: The Necessary Reference to Organized Crime; writer/co-writer of crime history articles for Informer, On the Spot Journal, Cigar City Magazine, Tampa Mafia Magazine.