On this date in 1874, Joseph Macheca played a critical role in the White League victory over a militia/Metropolitan Police force controlled by Louisiana's Reconstruction Era state government. The conflict stemmed from contested elections that resulted in the creation of competing state administrations and legislatures. 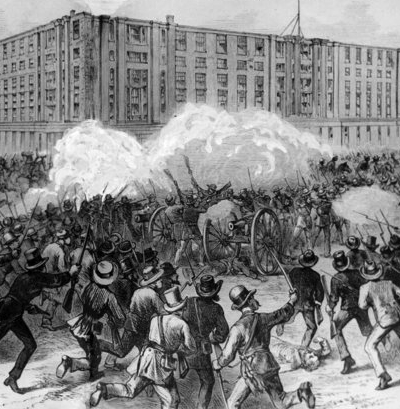 Following failed negotiations, Republican forces led by former Confederate General James Longstreet and Metropolitan Police "General" Algernon Badger moved several thousand men into position on the downtown side of Canal Street. Badger commanded hundreds of Metropolitan Police, along with 12-pound cannons and Gatling guns, in a location between the Customs House and the levee.

The White League paramilitary forces assembled uptown and hoped to lure Republican forces from their positions at the edge of the French Quarter. Shouted taunts, snipers and a quick attack and retreat failed to entice Longstreet into an advance.

Captain Macheca's Company B of Second Regiment "Louisiana's Own" made the decisive move. Using an approaching train as cover, Macheca's 300 men (the roster of his Company B at Jackson Barracks Military Museum lists only 120) advanced along the levee and flanked Badger's position.

As Company B swarmed in from the levee, most of Badger's men fled back into the French Quarter. Badger himself fell wounded and was protected from further injury by Macheca and his men. (Some wished to hang the wounded Badger as a traitor.)

Democratic forces retained control only for a short time, as President Grant moved the federal military into the area to support the return of the Republican government. White League supporters, viewing the conflict in New Orleans as a battle against oppression, later named the fight, "the Battle of Liberty Place."

On this date (Sept. 9) in 1874 - Joseph Macheca calls to order the first meeting of the Cosmopolitan Democratic Club in New Orleans. The group elects P. Torre Jr. as its president and Macheca as its grand marshal. The 'club' is a paramilitary order dedicated to the overthrow of Louisiana's Republican state government.

Similar organizations were forming throughout the New Orleans area in opposition to state and federal Reconstruction policies. Known collectively as the White League, the conservative Democratic forces soon would take up arms against state militia and police controlled by the Republican governor (Battle of Liberty Place).
Posted by Thomas Hunt at 6:06 AM
Labels: Battle of Liberty Place, Cosmopolitan Democratic Club, macheca, Reconstruction, September 9, Torre, White League

1863: Macheca and the black market

150 years ago today (Aug. 28, 1863), Joseph Macheca of New Orleans was tried and convicted in a Union military occupation court in connection with a scheme to steal and sell barrels of U.S. Army pork and beef.

The barrels were traced to the 4th Massachusetts Regiment. They had been loaded aboard the steamship North America, a government transport, at Port Hudson, Louisiana (recently fallen to the Union forces after a 48-day siege). The North American steamed its cargo up the Mississippi River in support of the 4th Massachusetts' advance to Cairo, Louisiana. Remaining barrels were brought to New Orleans, and the captain and a steward sold some to Macheca for resale through the Macheca family produce store in the city.

While other conspirators were sent to prison, young Macheca is merely ordered to pay a $50 fine.

Joseph Macheca previously had enlisted for service in the Confederate Army and returned home to New Orleans in advance of the Union invasion. The Union occupiers generally controlled businesses and provisions in the region. The produce business of Macheca's step-father - a native of Malta and a British citizen - was one exception.

Following his conviction, Macheca left New Orleans for Texas, where he reportedly gathered a small fortune through smuggling.

1890: Ambush at Claiborne and Esplanade

On this date (May 6) in 1890 - In the early morning hours, a wagon carrying members of New Orleans Matranga underworld faction is ambushed at Claiborne and Esplanade Streets. Three men are seriously wounded. Police Chief David Hennessy takes personal charge of the investigation. His involvement will shortly lead to his own assassination.
Posted by Thomas Hunt at 5:30 AM
Labels: claiborne, esplanade, hennessy, matranga, provenzano

March 14, 1891
One day after a jury refused to convict the accused assassins of New Orleans Police Chief David Hennessy, an angry mob assembles on Canal Street. Under the direction of political leaders, the mob marches to Orleans Parish Prison, where the Hennessy assassination defendants remain incarcerated. A carefully selected and well armed group enters the prison and murders eleven men, including Joseph P. Macheca. The victims are described as members of the New Orleans Mafia. However, recognized Mafia leader Charles Matranga and his chief lieutenant - both held within the prison - are spared.
Posted by Thomas Hunt at 7:52 AM
Labels: hennessy, lynchings, macheca, matranga, orleans parish prison
Newer Posts Older Posts Home
Subscribe to: Posts (Atom)

Deep Water is the historical biography of Joseph P. Macheca. In 19th Century New Orleans, Macheca was a pioneer of commerce, a Confederate privateer and, according to legend, the godfather of the first Mafia organization to germinate in American soil.

Link below to the sale page of each listed merchant. (Hardcover was available for first edition only.)

Writer, editor, researcher, web publisher, specializing in organized crime history. (I am available to assist with your historical/genealogical research, as well as your writing and editing chores. Email me at tphunt@gmail.com.)
I am editor/publisher of crime history journal, Informer; publisher of American Mafia history website Mafiahistory.us; moderator of Mafia-related online forums; author of Wrongly Executed?; coauthor of Deep Water: Joseph P. Macheca and the Birth of the American Mafia and DiCarlo: Buffalo's First Family of Crime; contributor of American Mafia history to Australian-published Mafia: The Necessary Reference to Organized Crime; writer/co-writer of crime history articles for Informer, On the Spot Journal, Cigar City Magazine, Tampa Mafia Magazine.